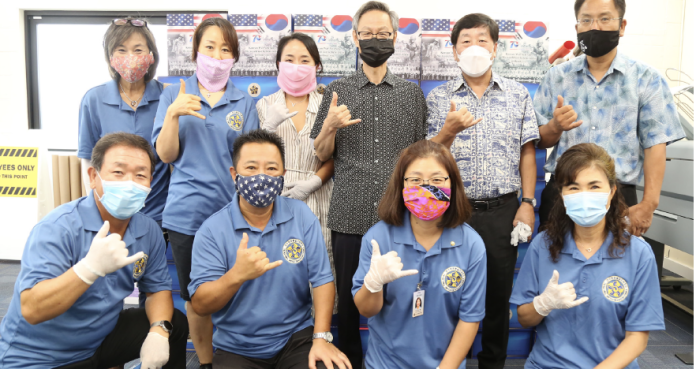 For the 19th Term, the NUAC decided to commemorate the 70th anniversary of the Korean War. Due to the COVID-19 pandemic and geographical layout of the Hawaiian Islands, the Korean War veterans could not be easily reached. Therefore, the NUAC, HI Chapter decided to personally deliver memorable gift packages to each veteran’s home on Oahu, Maui, and Kauai and to mail gifts to veterans on the Island of Hawaii. Veterans’ gift package consisted of handwritten thanking letters of the NUAC members, personal care kit, Korean traditional wine, ginseng tea, Korean snacks, K-Drama DVD, and a special edition booklet and video presentation commemorating the 70th Anniversary of the Korean War. Hawaii Governor David Ige, Ambassador Harry Harris and Consul General Kim, Choon-goo are among us to appreciate the veterans by joining in the booklet publication and video presentation. About 200 gift packages were delivered to veterans throughout the State. The reply letters from the veterans who received the package were overwhelmed with their emotion and their remembrance. This comprehensive effort was extremely successful. NUAC Hawaii chapter was grateful for the opportunity to express gratitude to so many war heroes. This further enhanced the value of public diplomacy and awareness of the peaceful unification on the Korean Peninsula.